Last week we published the original community map produced by Wester Hailes Rep Council in 1987. This week we can show you the 1992 edition which followed on from it. As before, if you click on the map and scroll you’ll be able to zoom in and see any part you like in magnified detail.

In many ways there’s not a lot of difference from five years before but there are some significant changes. Firstly, blocks 4,5 and 6 of the Hailesland Park multis have disappeared and been replaced by Prospect Community Housing’s first development – the Walkers low rise new build scheme. The adventure playgrounds built by the community – the Venchie itself and the playgrounds at Clovenstone and Hailes Quarry Park (including the Quarry Youth Hut) – no longer exist. Also gone are the Cafe Venchie and the PAD Community Centre next to the Greenway in the Wester Hailes Park and Drive area. Other new facilities and buildings include the railway station, the Pyramid Youth Centre in Dumbryden, the Star Coffee Bar at Hailes Quarry and the Clovenstone Old Peoples Home.

In addition to the physical description of Wester Hailes the map sheds an interesting light on how the community structure had developed since ’87. The insert section in the top right provides details of the 23 Neighbourhood Councils, each with their own elected committee, which were functioning by this time, facilitating grass roots input and channelling activity into the Rep Council. 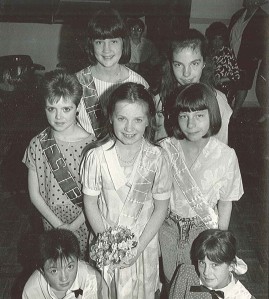 This week we’re taking a look back to June 1987, to see what was happening in Wester Hailes 25 years ago as reported by the Sentinel.  The front page story focused on the high turnout in Wester Hailes for the General Election, with 67% of the local population casting their vote.  Other stories include

In 1983 Wester Hailes Representative Council produced a special map of the area which showed in impressive graphic detail every individual block of housing and the whole range of community facilities that existed at the time. Drawn by Rolando Ugolini it’s more than just a map, it’s a very valuable social history document and a little work of art in its own right.

Previously, we’ve shown some sections from this map on the blog but we can now let you see the whole of it and at a much better level of quality. Also, if you click on it and scroll you’ll be able to zoom into specific parts to look at them more closely. Very many thanks to Kathie from Malcolm Fraser Architects who undertook the technical wizardry to make this happen and Eoghan Howard who arranged it all on our behalf.

And here’s a few photos from our archive to accompany it. The first shows the bypass under construction (in 1983 you’ll see from the map that it was still only at the proposed route stage). In the immediate background is Wesburn Grove and just beyond that a couple of the multis and some of the four storey housing in Wester Hailes Drive. 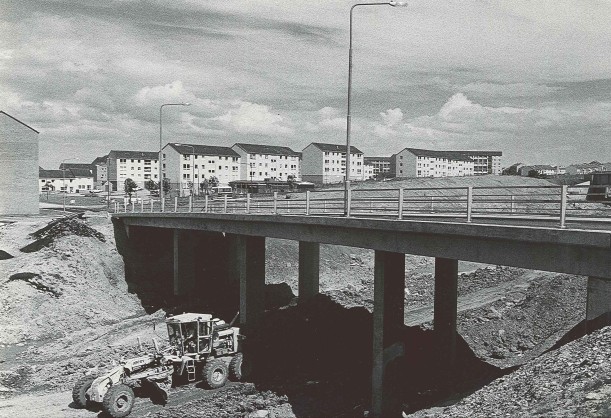 This next one is an interior shot of the Cafe Venchie… 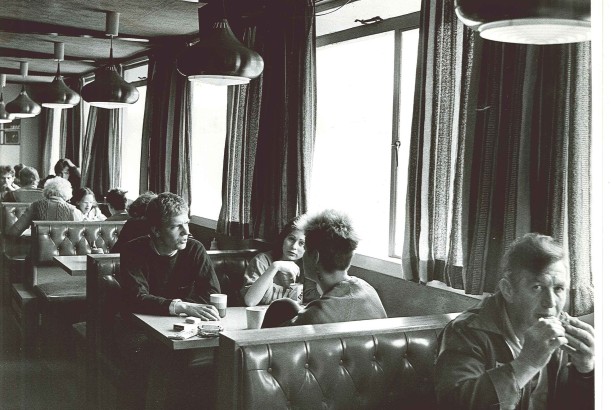 And finally, one of the Westburn Gardens multis, we think this is probably block one on the map (the block itself may be long gone but the fences are still here!)… 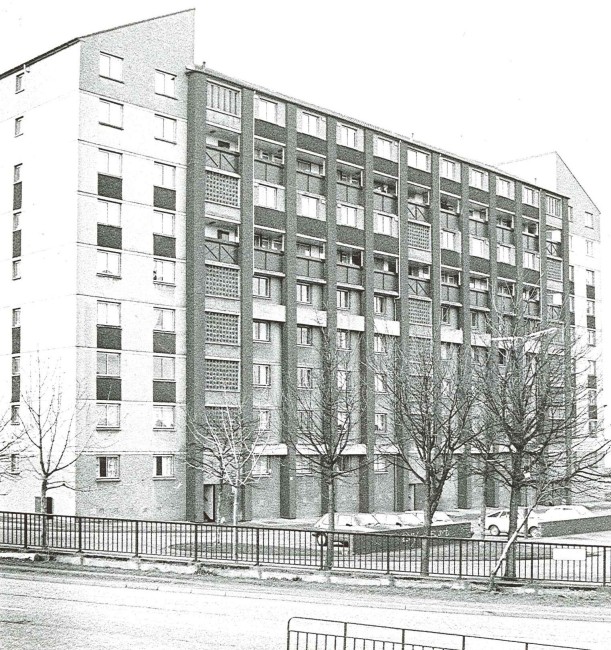 It might not have been the driest of days, but that didn’t stop people turning out to take part in the Wester Hailes Fun Run last Saturday.  Showing plenty of Olympic spirit, runners braved torrential rain to complete a 5k circuit of Wester Hailes that included the famous Greenway hill.  The idea to organise a run in

2012 came after an article here on the blog reminded people of what a great event the Fun Run used to be.  Several of the runners

remembered taking part in the old Fun Run, including Kim Forbes who won it 22 years ago.  Keeping the fun in the run, a group of participants walked the whole route in fancy dress. Despite being drenched, everyone was full of enthusiasm, saying how much they had enjoyed taking part.  Some supporters braved the weather but there was also a lot of encouragement and cheering from windows along the way.

At the top of the Greenway, Clovenstone Community Centre ran a water station to help people on their way

and to keep the runners on track.  Other partners involved in planning and supporting the run with volunteers were CHAI, Wester Hailes Health Agency, Prospect, Wester Hailes Community Council, Community Learning and Development, and Lothian and Borders Police.  The council did a great job in clearing the route, cutting back branches etc to make the run safer.  Gordon McDonald MSP was on hand to start the runners off and stayed to cheer everyone on, and Donald Wilson the new Lord Provost came to lend support.  Congratulations to all who completed the route and hopefully there will be a Fun Run next year, only this time in drier conditions!

Thanks to the intervention of Wester Hailes Community Council there is now the possibility that the pedestrian walkway which will link the new Healthy Living Centre, currently under construction at Harvesters Way, with Westside Plaza could be extended and improved.

The current proposals have been drawn up to fit into a very restricted area because an agreement reached between the City Council and AWG (the owners of the shopping centre) allowed for only three car parking spaces in the Plaza car park being converted to help accommodate the walkway.

However, the Community Council has taken the initiative in this matter and written to AWG’s parent company asking them to consider making more of the car park area available so as to extend the space for the walkway and make it a safer and more accessible link. A reply has been received from AWG assuring the Community Council that this issue is being taken very seriously and that the company’s intention is to help and work with the local community. The ball is now in the City Council’s court to build on this positive response from AWG and reach an agreement for more land to be made available.

As we highlighted in April, the Harvesters Way placemaking exercise undertaken by internationally renowned designers Gehl Architects identified the need for strong pedestrian linkages between the Healthy Living Centre to all parts of the surrounding areas. In particular, the link with the Plaza was seen as being of crucial importance in the successful regeneration of the derelict site.

As we highlighted a couple of months ago, one of the promises made by the new council administration was to close down the official council newspaper Outlook.  Earlier this week, it was announced that the next edition of Outlook, due out next week will be the last.  There will now be a review on what would be the most effective way for the council to communicate with the public.  One suggestion in the mix of proposals for Outlook’s replacement is to use that budget to fund community newspapers.  Outlook had a budget of £200,000 a year.

It is very encouraging to see community newspapers being given more priority and consideration and it would be great to have a thriving local media network across the city that reflected the views and interests of local communities.

Whilst paper media is probably still what most people would choose, there are a growing number of new media outlets that offer scope for training around digital skills and online experience.  The Olympic torch relay in Scotland is being covered by Citizen Relay, a project that relies on local people to report on the relay at a neighbourhood level.  Citizen reporters have been able to access training and are using a variety of online media to report their stories and news.  The Sentinel used to offer training and placement experience to local people including young people who gained experience in writing and producing articles and pages.  Online citizen reporting offers a similar experience that can be built on for further training and/or employment.

Whatever shape the new Wester Hailes community media has if funded through the closure of Outlook, it will remain crucial to its success and sustainability that it has an independent voice.  It will also be important that the resulting publication is managed by local residents and that it raises a range of issues and concerns as well as providing information and news.  There are a range of  community led projects currently developing in Wester Hailes around an online Sentinel model and it is hoped that any funding input would be looking at what is already happening.  It will be interesting to see the results of the planned review and what it is then recommended.

In the first part of her Q & A, two weeks ago, Lisa McDonald revealed that she had helped edit an issue of the Sentinel along with some of her classmates at the WHEC. Intrigued by this, we searched through our archive and were able to find the particular edition (December 1988) to which she was referring. The front page carried a picture of the intrepid cub reporters and here they are:

As well as Lisa, the team consisted of Lynne Gow, Lorna Anderson, Sarah-Jane Hiroz and Conchi Peacock. The girls carried out a survey around Wester Hailes to find out people’s views about two popular subjects in 1988 – Bros and Neighbours. Bros had recently been topping the charts and the wedding of Scott (Jason Donovan) and Charlene (Kylie Minogue) in Neighbours had been screened on British TV the month before.

Presumably to make the whole thing a little bit quicker and easier, the girls interviewed themselves as well as others and we thought we’d take the opportunity to share their responses with you. All of them, bar one, were rabid Bros fans…

Lynne loved Bros and described them as “wickedly happening” and the “best thing since Elvis“. Lorna thought they were “trendy dressers” and Luke was “so sexy“. Sarah-Jane also loved Bros, “they are happening” she said. Conchi thought they were “hip and trendy” and that Matt was “cool” and she also owned up to being a fan of Brother Beyond.

The one exception was Lisa who is quoted as saying that Bros were “indescribable rubbish” naming her favourite group as Aztec Camera. So far so good… but then she went on to confess that she loved neighbours ESPECIALLY Jason Donovan!

However she was in good company, all the rest of the girls were also big Neighbours fans: Lynne – “the talent is well chosen“; Conchi – “it is neat“; Sarah-Jane – “it keeps you watching“.

The feature which took up the whole of page 15 was written and designed by the girls and included a “Bros Factfile” and a list of “Ten things you always wanted to know” about Neighbours.

Many thanks to Lisa for providing us with the clues to track down this long lost piece of journalism!

Search From There To Here

From There to Here: a Wester Hailes Story

All reasonable efforts have been made to ensure that the information provided on this blog is accurate and that appropriate permissions to use written content and images have been sought. If you have any queries about the content/ images used or the copyright information attached to them, please contact us using the form below.